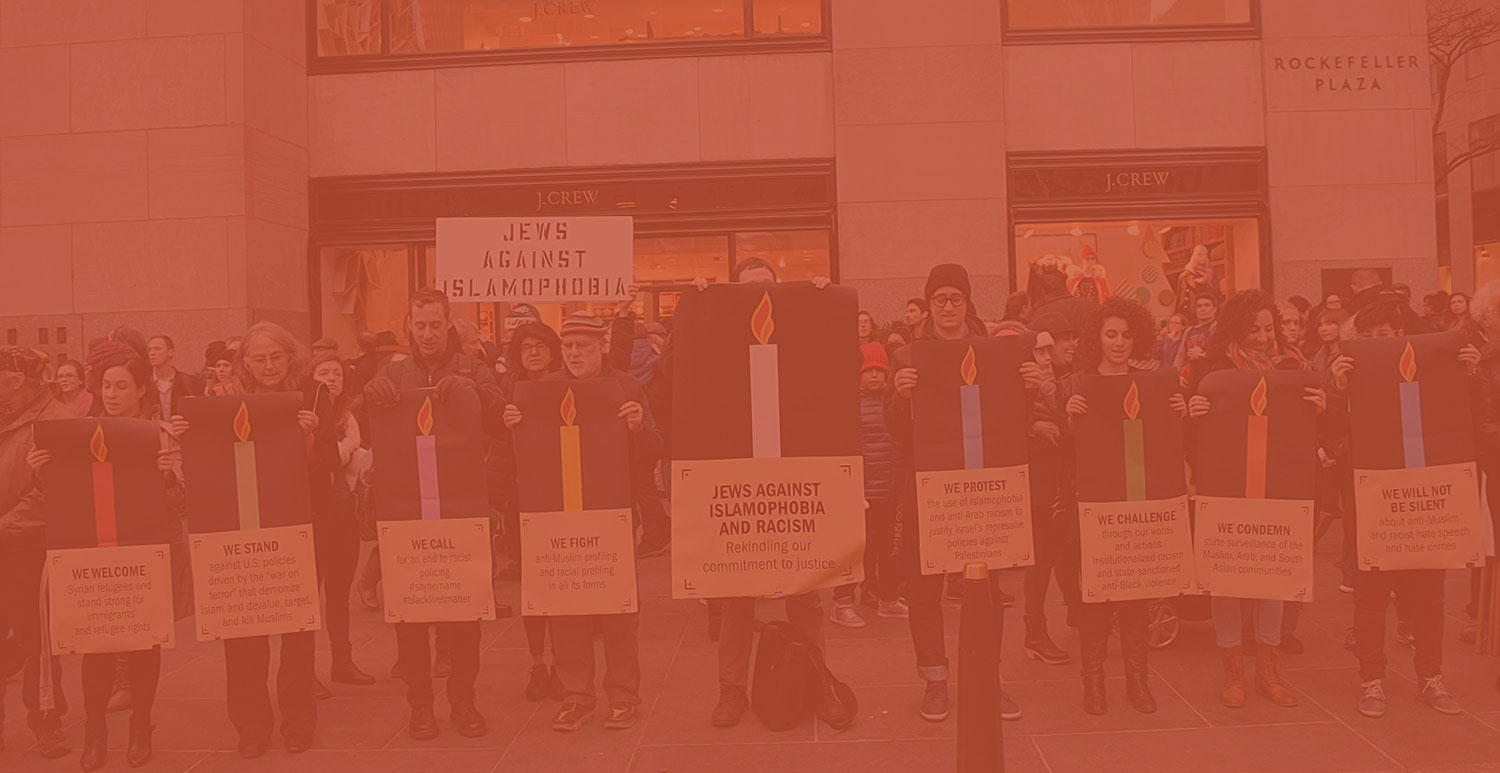 The Muslim community and those perceived to be Muslim are enduring vitriolic, frightening levels of anti-Muslim hate and violence throughout the country- -being spit on, shoved, verbally harassed and abused, physically assaulted, shot, and more. This hate and violence do not exist in a vacuum. They take place in the context of ongoing and systemic Islamophobia and racism that are pervasive and deep within our society.

Each night of Chanukah, JVP members and supporters in different cities gathered publicly with signs that contained an injustice we recommit ourselves to challenging.  When held together, the signs were in the shape of a Chanukah menorah.  These actions were initiated by Jews Against Islamophobia in NYC (a coalition of Jews Say No! and Jewish Voice for Peace–NYC) and the Network Against Islamophobia, a national project of Jewish Voice for Peace.

We will not be silent about anti-Muslim and racist hate speech and hate crimes;

We condemn state surveillance of the Muslim, Arab, and South Asian communities;

We challenge, through our words and actions, institutionalized racism and state-sanctioned anti-Black violence;

We protest the use of Islamophobia and anti-Arab racism to justify Israel’s repressive policies against Palestinians;

We fight anti-Muslim profiling and racial profiling in all its forms;

We call for an end to racist policing #SayHerName #BlackLivesMatter;

We stand against U.S. policies driven by the ‘war on terror” that demonize Islam and devalue, target, and kill Muslims;

We welcome Syrian refugees and stand strong for immigrants’ rights and refugee rights.

Join the Fight Against Islamophobia

Stand by me: To mark the eight days of Chanukah, Jews in 15 U.S. cities will rally nightly against Islamophobia and racism

These People Are Fighting Anti-Muslim Hate After San Bernardino

Love in the Time of Mania: Six Ways Americans Are Defying Islamophobia

Not all Muslims are terrorists’: Springfield rally protests prejudice, hostility toward Muslims

Jewish voices rally for peace as they challenge Islamophobia

“We will not be silent”: American Jews hit the streets during Hanukkah to fight Islamophobia and racism

Jewish Voices for Peace Say No to Islamophobia

Jewish Voice for Peace rekindles commitment to justice during Chanukah

1st Night of Chanukah Marked by Challenging Islamophobia in U.S.

Why We Must Challenge Islamophobia in All its Forms