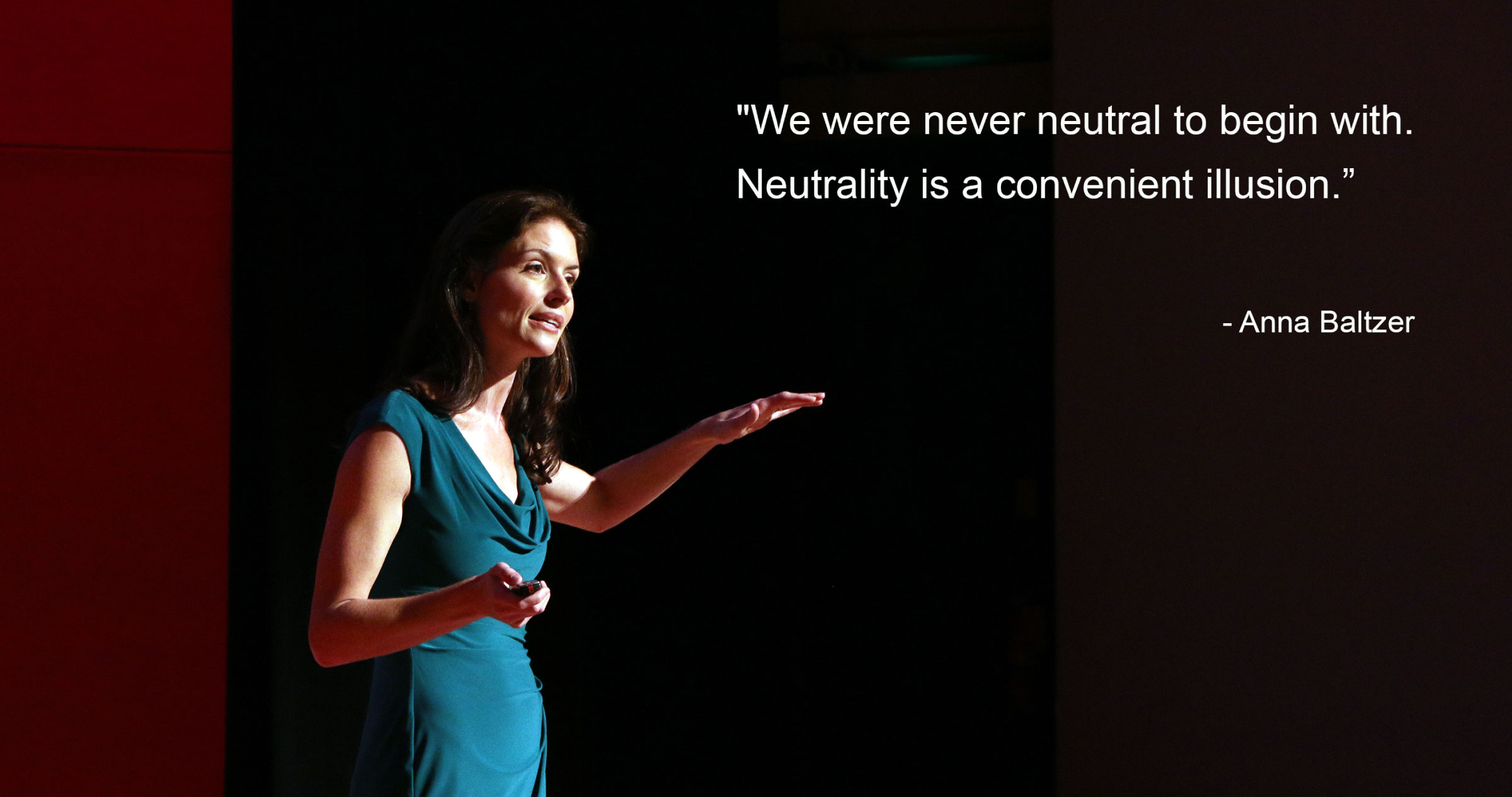 The Danger of Neutrality – Anna Baltzer at TEDxOcala

Featuring Anna Baltzer, Director of Organizing & Advocacy at US Campaign for Palestinian Rights and Jewish Voice for Peace member. Anna is a Jewish-American Columbia graduate, former-Fulbright scholar, the granddaughter of Holocaust refugees, and an award-winning lecturer, author, and activist for Palestinian human rights.

I’ve always thought of myself as a fair person. A do-gooder. A peace-maker. I always tried to remain neutral in situations of conflict — to bring everyone together instead of taking a side. I thought that was the moral high ground. But I was wrong.

We hear about the importance of neutrality all the time. Reporting has to be fair, and balanced. Our opinions have to be fair, and balance. A perfect example is when the topic of Israel/Palestine comes up. Yes, Palestinians have been killed, but so have Israelis. It’s complicated, we’re told. Shouldn’t we be a moderating force to bring both sides together rather than being one-sided?

I had to question these assumptions when I traveled to Palestine to see for myself what life was like for Palestinians living under Israeli occupation. I found a system of segregated roads — with nice roads for Jewish Israeli settlers and separate roads for Palestinians. I comforted a friend whose 6-month-old baby died slowly in her arms of a simple asthma attack as they waited for hours at an Israeli checkpoint, prevented by soldiers from passing to reach the Palestinian hospital on the other side. I stood beneath a 25-foot concrete wall that separates Palestinians from their own families, their schools, their jobs, and their lands. Everywhere I went, I saw inspiring Palestinian popular resistance and its violent suppression by Israel, a military superpower armed by my own country, the United States. [1] I began to understand what was happening around me as part of the ongoing displacement of indigenous Palestinians from their lands and resettlement of Jewish Israelis in their place. And I knew that Israel would pay me to leave the United States and move to that same Palestinian land anytime I wanted, simply because I’m Jewish.

What did it mean for me to be impartial as I witnessed these injustices? Whom did my impartiality benefit? It became clear that neutrality wasn’t a catalyst for mediation or change; it was the exact opposite. It was a trap — a dead end. It maintained the power imbalance exactly as it was, leaving the scales tipped in favor of those with power.

The thing is, I had grown up like many Jewish Americans — as a Zionist. That is, I supported a Jewish state in historic Palestine. My grandmother’s stories of her escape from Nazi Europe, and the murder of most of her family, were deeply formative for me. I wanted so much to believe that a Jewish state could be a good thing. I was a balanced person, I told myself: I wanted peace for everyone, including Palestinians. I did not know at the time that Israel’s Jewish majority could only exist through the removal of Palestinians. But deep down, I knew there were contradictions between the important lessons my grandmother had taught me and what Israel was doing to Palestinians in my name.

Well, here’s a surprise. When I finally gave myself permission to take a side and reject Zionism, I found a liberation I could never have expected: a liberation from my fear of the other; a liberation from the contradictions and the paralysis. I had worried I would lose so much, but instead I had found exactly what I was looking for. I was not rejecting who I was; I was finding who I was.

Today, I want to encourage you to give yourself permission to take a side. Do it – and own it. Because it’s the right thing to do, and because your own liberation depends on it.

I want to acknowledge that the stigma against taking a side is not shared by everyone. In fact, the lessons I’ve learned are downright obvious to people targeted by state violence, who have no choice but to fight for their rights. Many of them have pointed to the dangers of neutrality for centuries, but people like me were not listening. Today, I am speaking to the many out there like me who have remained neutral in the face of controversy. It’s time for us to listen, and to act.

Taking a side means being accountable to those who are being oppressed, not deciding what they need and how they should get it. It means heeding their calls to action, which may look like starting conversations with your family and friends, or engaging in campaigns like boycotts and divestment, or stepping out of your comfort zone and taking to the streets.

Let me ask you something. How many of you, like me, celebrate the Civil Rights Movement and imagine that you would have been the one holding Martin Luther King, Jr.’s hand, marching from Selma to Montgomery; that your home would have been a stop on the underground railroad for runaway slaves, regardless of the personal risks? The thing is, it’s easy to stand against slavery and 1960s Jim Crow laws today. But we forget how controversial they were in their own time. We forget that the successes of the Civil Rights Movement did not come from legitimizing both sides; that slavery did not end from bringing both sides together. Change happened because people took sides, and took risks.

Anyone can celebrate Dr. King today, but there is one question to gauge the likelihood that you would indeed have been there with him. Where do you stand on the freedom struggles of our time? Do you stand boldly with the freedom fighters?

I found today’s Selma when the Ferguson Uprisings erupted a short distance from my home in St. Louis after the police killing of unarmed Black teenager Michael Brown, Jr. A grieving community engaging in time-honored tactics of protests and civil disobedience was met with militarized police and National Guard armed with guns and tear gas, backed up by every level of institutional power.

I came to understand Mike Brown’s killing in a larger national context in which Black people in our communities are routinely stopped — and often killed — by the police, who are almost never held accountable. Black people are 4 times more likely than white people to be killed by police,[2] and more than 5 times more likely to be imprisoned [3] — often for drug convictions, even though statistically white people and Black people use drugs at the same rates, [5] and white people deal drugs at higher rates. [6] When Mike Brown was killed, Ferguson had an almost all-white police force that pulled over and arrested almost exclusively Black people, even though their own records showed that white people pulled over were significantly more likely to be carrying weapons or drugs.

These things do not come out of nowhere. I learned that our police system evolved as a continuation of slave-catching [7]– just one example of how our national legacy of white supremacy continues to this day. Through my own internal work, I’ve also come to see the ways in which I personally benefit from racism and have been socialized to be racist. Even if I did not choose that socialization, I still have to work to unlearn it.

In a system of inequality, we are all granted different levels of access, opportunity, and power – often from the day we were born. The hand we were dealt is not our fault, but it forces us to reckon with the reality that whether we choose to act or not, we were never neutral to begin with. Neutrality is a convenient illusion.

On the streets of Ferguson, I saw the key to our collective liberation. Because white supremacy dehumanizes us all. It’s killing Black, brown, and Native people quickly. And it’s killing white people slowly. Our liberation is intertwined — just as the liberation of Jews cannot be realized without the liberation of Palestinians. When we stand together on the same side, not in coexistence but co-resistance to injustice, we reclaim our own humanity.

So what is the key to knowing which side to take when it comes to a controversial issue today? It’s simple. There’s a golden key. Look at who has power, and who doesn’t. And side with those who don’t, those who are seeking the rights that others take for granted. Rather than just talking about abstract equality, we need to talk about equity. Equality is about treating everyone the same; equity is about seeing the imbalance and actively leveling the playing field by lifting up and standing with those who have been held back.

When we say “Black Lives Matter,” it’s not because we don’t value other lives; it’s because in today’s world, Black lives are devalued, and their value must be affirmed. Every life matters; but every life is not under daily threat from the police.

When we say “Freedom for Palestinians,” it’s not because we don’t want Israelis to be free. It’s because Palestinians are being denied the freedom that Jewish Israelis enjoy every day.

It only takes a small but critical mass to change the course of history. So go ahead. Risk change and pick a side. And I’m not talking about siding with one racial or ethnic group against another. I’m talking about taking the side of justice. The side of history.

You may be surprised to find what you’d been looking for all along. Because taking a side is the best thing that can happen to all of us. It allows us to realize the person we want to be – for our neighbors, our children, our own integrity. Take a side. Because this is a fight of our lifetimes.

Jewish Voice for Peace is a national member-driven organization dedicated to a U.S. foreign policy based on peace, human rights, and respect for international law.

Back in the mid-90s, three young Jewish women realized they could no longer keep silent about Israel’s occupation – and decided to do something about it. Watch their story – our story – here.

GET THE DEADLY EXCHANGE REPORT

Researching the American Israeli Alliance and Jewish Voice for Peace’s report reveals the extent of massive training programs between U.S. law enforcement and Israeli police, military, and the Shin Bet.

When US law enforcement trade tactics with the Israeli police and military, Israel deepens its military occupation and the US heightens its violence of policing.

Days ago, Booking.com bowed to pro-Israel activists and started describing all of Jerusalem as a “city in Israel” – literally erasing Palestinian East Jerusalem. Let’s get Booking.com to tell the truth: East Jerusalem is occupied territory.

No one should be killed for taking part in a peaceful protest. It’s up to us to call on progressive Senators to investigate Israel’s massacre in Gaza that killed over 100 Palestinians wounded 12,000 others.